One of my favourite buildings in Toronto has got to be, hands down, the iconic Fairmount Royal York Hotel. Located at the edge of Toronto’s central business district, across from Union Station at 100 Front Street West, the Fairmount Royal York Hotel has been a historic landmark in the city since it first opened in 1929. Earlier last week, I was delighted to attend the launch of the Fairmount Royal York Hotel’s partnership with the premium all-natural Caesar mix, Walter Caesar, to create the Royal Caesar. Sold exclusively at the hotel, the Royal Caesar will be served in hotel guestrooms, onsite bars and restaurants. I am a huge fan of Walter Caesar’s amazing blend and have featured their delicious recipes before in my holiday party-planning guide. So, when I heard that they were spicing up their recipe I could not wait to try their new smokey blend! 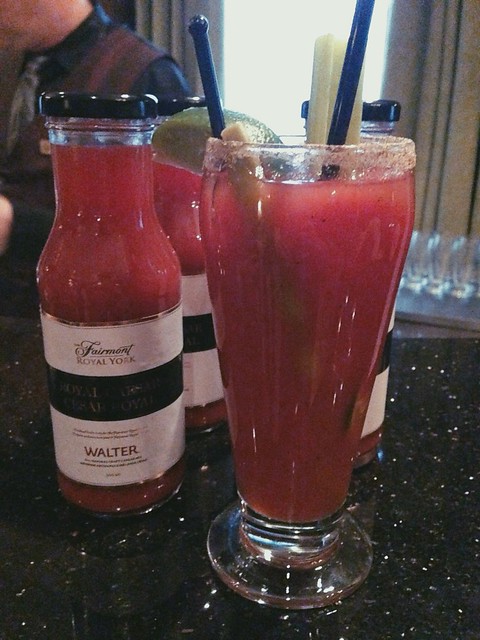 “Our guests have always loved The Fairmont’s classic Triple-Pepper Caesar,” says Patrick Lernihan, Director of Food and Beverage for The Fairmont Royal York, “so we’re thrilled to have Walter provide us with an all-natural spin on our signature Canadian cocktail.”

Walter Caesar created this custom recipe with the food and beverage team at The Fairmount Royal York Hotel to put their own signature spin on this classic Canadian cocktail made with all natural ingredients such as vine-ripened tomatoes and Ocean Wise recommended clam juice from the North Atlantic. Produced and packaged in individual 300 mL bottles, this cocktail will be made in house with the ultra-premium vodka Ketel One vodka. “The primary difference between the Royal Caesar and regular Walter is in the signature spice blend,” Walter co-founder Zack Silverman explains, “which includes delicious hints of cumin and chipotle, giving the Royal Caesar a complex and earthy flavour. It’s truly a one-of-a-kind cocktail.” If you haven’t yet had the chance to try one of the classic Walter Caesar, then you’ve been missing out! The perfect treat to enjoy at your next brunch or refresh yourself later in the day, Walter Caesar is proudly crafted in Toronto using only the best all natural ingredients. So stop by The Fairmount Royal York  to try one or pick up your own bottle today of one of their other great mixes at  waltercaesar.com.